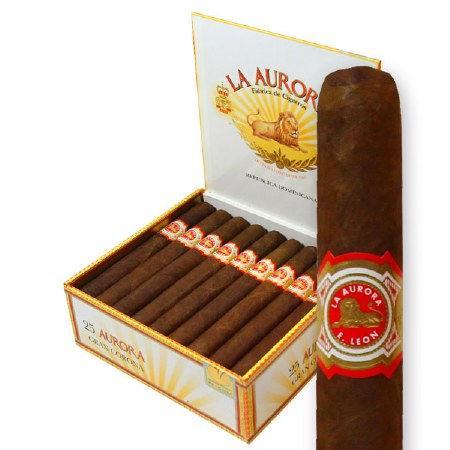 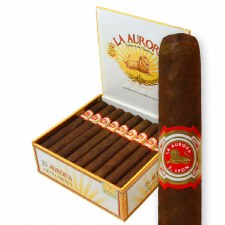 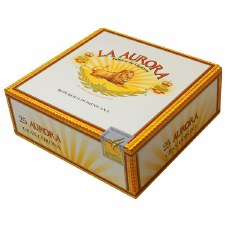 La Aurora has been delivering cigars to the public for over 100 years and the new La Aurora E. Leon is living up to the tradition set in years past. It is constructed of a natural African Cameroon wrapper, surrounding Dominican binder and both Dominican and Nicaraguan fillers. Its complexity delivers a woodsy and slightly spicy flavor and finishes with creamy and leathery notes. The La Aurora is a long-burning premium cigar, perfect for the frugal aficionado.

A decent enough smoke, but nothing that makes you want to buy a box. It was well built, had a good draw, gave off lots of smoke and tasted good. A good daily smoke cigar but not one I'd go out of my way to pick up.

I would say it was an very easy draw with a mild to medium flavor. I did find it slightly bitter at the start, but that went away rather quickly.

Not my favorite smoke in the test batch. Veiny wrap on this stick and would not stay lit. Don't know if it was just a bad stick or a problem with the line. The first third was a little pepper and spice in flavor but as it burned to the middle third the intensity rose and became very strong almost to the point of not finishing. I am not sure if maybe I was smoking it a little fast and never gave it a chance to cool down, but I could not finish it. With all that said, I am usually a fan of the La aurora line, but this one stick was not great.

Took this one to the beach and didn't find much notable about it. It wasn't bad, just ordinary. I got an even burn and it didn't leave a long term mouthtaste. A solid medium bodied smoke that lasted about 45 minutes.

Burned well, smoke was mild to medium, easy draw, a good every day cigar if that is your choice. Was not able to smoke to the nub....but overall good!

This was not up alley. It burned well, and initially had good flavor. Nothign great for me, but it was alright. About halfway through it started to get a little bitter and the flavor just got worse. So much so that I just laid it down, just past halfaway. Just wasn't doing it for me, but there is someone out there who it fits.

Not a lot of flavor - somewhat thin with a short finish.

Not a cigar i would go out of my way to look for.

Good smoke, it played well on the golf course...I did not. Nice wrapper and burn.

I decided to give this cigar a shot before I purchased the discounted box. I have to say I am glad I tried it first. After smoking it for about 20 minutes I put it to rest and purchased a different cigar. Flavor was not good at all, the burn couldn't have been any worse. To be honest, Aurora should probably take their name off of this one.

Nice construction and good overall wrapper. Burn and draw are great. As far as flavors it has a light coffee bean undertone overshadowed by a dried hey taste. About half way through it picks up a more satisfying leather taste though it stills taste a little young. It does develop more depth about 1/3 of the way end. For the price this would probably be a good cigar for a beginner to figure out their palate

Very fragrant with a nice oily wrapper. Well constructed and smoked very even. Spicey at the begining and mellowed to the end. Good cigar for the price.

This cigar is suitable for a daily smoke as it's pretty smooth, but it's not very complex and the wrapper started to unravel about halfway through the smoke. Ok cigar.

Wonderfully fragrant. Rich & leathery. I did not feel it was long burning as it is promoted.