Will Syrian cigars ever become popular? 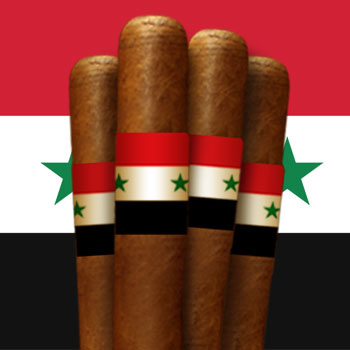 Syria would seem to be the last place on Earth that one might think is a source for fine cigars. However, Al Arabiya News is reporting that a company called the Syrian General Organization of Tobacco is gearing up to start producing cigars for export. The company will have an initial run of 10,000 cigars for export. They will be sold in wooden boxes and will have a logo consisting of an eagle and tobacco leaves.

The venture has a considerable number of obstacles to overcome if it hopes to succeed. First, the Syrian General Organization of Tobacco has had economic sanctions placed against it by the European Union for economically supporting the Bashir Assad regime. Second, Syria is a war-torn country with a number of militia armies, the Syrian government, and ISIS vying for control. Finally, Syrian-produced cigars are going to have to compete with the more familiar Cuban variety, about to become legally available in the United States for the first time in decades thanks to President Obama’s recent diplomatic overtures to the communist-ruled island nation. Syria’s climate may be a little too dry to grow premium tobacco.

Still, some cigar aficionados suggest that Syrian cigars will find a market just for the novelty, at least initially. With Cuban cigars soon to no longer be forbidden fruit, Syrian cigars could start to occupy that niche. However, if the Syrian cigar venture is to be a long-term success, it will have to sell a quality product that cigar smokers will enjoy for its own sake. Thus far, that is an open question.