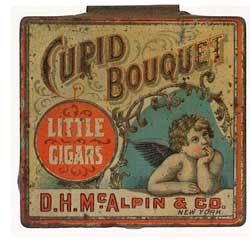 Have you ever ordered a tin filled with cigarillos from an online cigar store? If so, you might want to thank your inventive, taxpaying ancestors for the privilege. Prior to 1870, the government strictly prohibited the sale of any size cigars in tin containers. They changed the law at that time, in part, because they had finally found a way to successfully affix tax stamps to metal.

At first the handmade, expensive tin boxes were not very popular. People didn’t take to the added cost or appreciate the way some of the boxes fell apart at the seams. Of course as cigar manufacturers became better at making the tin boxes and lowering the prices to levels that were on par with wooden ones, that all started to change. Soon, cigar smokers across America were not only purchasing large tin boxes, they were going after flat tens and pocket tins too.

The flat tens, as you might have guessed, held 10 cigars at a time. They were square, hinged containers with horizontal graphics. Most of the tins that fell in the flat ten category were also around 3-inches squared. Even though the pocket tins held the same amount of cigars and had horizontal graphics, they were different from the flat tens in two key ways. First, they had slip tops. So cigar aficionados of the time didn’t have to worry about broken hinges. Second, the tins were normally 5-inches squared or slightly less. As such, they fit a man’s pocket perfectly.

As the 20th century rolled around, the flat tens and pocket tins were joined by cigar lunch boxes, round tins, state journals and novelty tins. State journals, in case you’ve never heard of them before, stand upright and sport either an oval or oblong shape as well as hinged lids. Manufacturers also expanded their use of metals to include more than just tin. So cigar smokers of that day and age had a lot of different metal boxes to choose from.

Today, it’s much the same way for people that wisely opt to purchase their premium tobacco products from online cigar stores. For proof, just take a look at our assortment of cigarillo tins. Not only are they eye candy, the sturdy tins hold some of the most popular, flavorful cigarillo brands in the world. Plus, the counts vary greatly too. For instance, the Café Crème Blue Cigarillo Tin contains 20 smokes and the CAO Brazilia Cariocas Cigarillos Tin houses five full-bodied beauties. Other tins may hold ten cigarillos. To learn more about all of the possibilities and participate in a tradition far older than your grandparents, please contact us or swing by our online cigar store today.