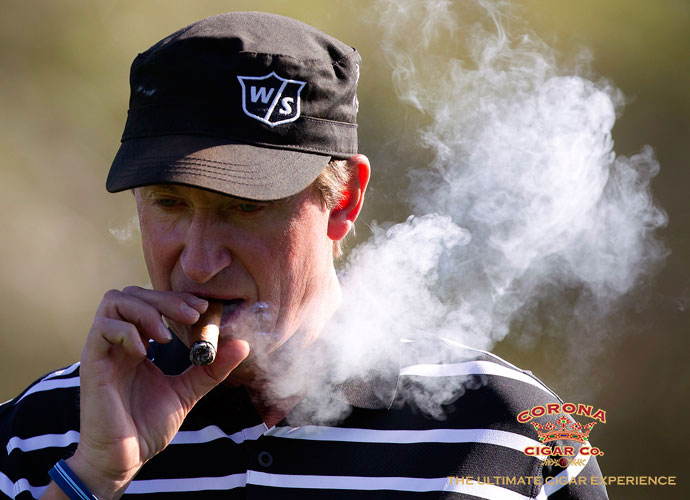 "Hockey Great" Wayne Gretzky's dad, Walter, helped him into his first pair of ice skates when the boy was two years old.

Is it possible for a two-year-old boy to love hockey? For toddler Wayne Gretzky it was. No one but the Brantford, Ontario native may know exactly what triggered his love for the game at such a tender age. Maybe he soaked up the hockey aura before he was born. It's as good a guess as any.

What matters is, the light of his passion for the game still burns bright.

Other hockey kids dive into the game when they're 10 or 11. By the time Gretzky was their age, he was practically a veteran player.

When he was six years old, Gretzky was studying the game up-close. He'd draw an ice rink on a piece of paper, then head for the TV to watch a game. His single focus? Watching the puck. Where it went. Who had it. Where all the action was taking place on the ice.

"Recording" the action on his sheet of paper told the young Wayne what he wanted to know about puck handling.

Watching his son watching the game told his dad something, too: that greatness lay in Wayne's future – as long as he didn't lose his passion for the game.

When Wayne was ready to play in a league, Walter came up empty. His six-year-old was too young. He'd have to wait four more years. Unless…

... Walter could wangle a tryout for Wayne. He passed the tryout, and scored his first goal that first season on his first team.

When you're doing what you love, you don't take a break on weekends. Wayne spent 12-hour-days on Saturdays and Sundays, practicing on the ice rink his dad had built for him in their backyard.

By the time his 20-year NHL career ended, Wayne Gretzky, jersey number "99," would break 61 records. Some of them his own.

As close as a father and son can be

Father and son were very close, "best friends," in fact -- though they did have their ups and downs.

Wayne spent the lion's share of his awake hours on the ice, and Walter was on hand to watch.. He never missed a game or a practice.

Did that mean he was pushing his son into a hockey career?

Gretzky tells it like this: "He didn't push me, he just supported me… [he] gave me that chance and that opportunity, like putting the rink up in the backyard."

Wayne had his first cigar when he was 27. He enjoys getting together with the guys and relaxing with a good cigar.

Others have said it, but Zino Davidoff may have said it best. "We are brought together by a common bond - the cigar…. this solidarity which unites men of tobacco – growers, merchants, and devotees – in all countries." We carry brands from A to Z, including Wayne Gretzky's choice of mild cigars. Browse our online selection and please contact us for any questions.