Cigars In The Movies 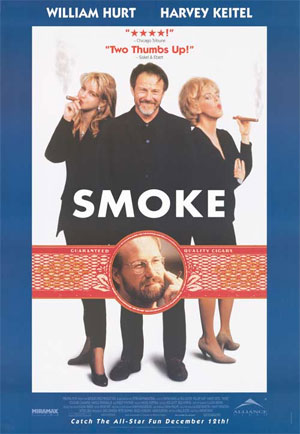 Cigar smoking in movies serves as one of the signs by which we identify a character. Cigars usually imply that the person has authority (a boss or wealthy), appreciates the finer things, and is reflective.

Perhaps the best representation of the finer things and reflective qualities part of this equation was displayed in the movie Smoke. It was released in 1995, with Harvey Keitel and William Hurt. Keitel played the proprietor of Brooklyn Cigar, a small neighborhood store at 16 Street and Prospect Park West. Brooklyn Cigar was a hub of neighborhood communication, and served as a place where all sorts of characters reflected on their lives. The poster shows Keitel flanked by a wife and a girlfriend, both smoking cigars.

For bosses? Think of newspaper boss J. Jonah Jameson in the Spiderman series. He puffs on a cigar whenever he is acting most boss-like—ordering that Spiderman be found, surveying the city from his high-rise window, barking orders to underlings. It’s part of the boss persona, along with suspenders and issuing commands. Watch how often a cigar shows up in clips of Jameson from those movies: https://www.youtube.com/watch?v=IgL8h_u2PHw.

Finally, the James Bond movies often use cigars to show facets of the characters. In 1995’s Goldeneye, Xenia Onatopp (Famke Janssen) wields a cigar while gambling in the Casino and wearing an elegant black dress. The cigar connotes that she is sexily knowledgeable rather than kittenish—it’s cigars as sex symbol. A few years later, in Die Another Day, Pierce Brosnan as James Bond wields a Cuban cigar in a breezy Havana bar—the cigar adding gravitas to his tropical shirt and cultural acuity to his list of characteristics.