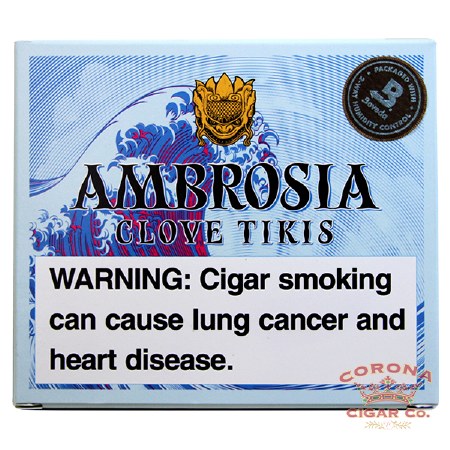 Ambrosia Clove Tiki Cigarillos, blended by Jonathan at Drew Estate, have a complex tobacco blend. The Ambrosia cigarillos are the most difficult cigar for Jonathan to produce. Trying to describe the Ambrosia is a bit difficult since there are no other cigarillos like it. The taste is slightly sweet with aromatic undertones of clove. The sensual aroma of the smoke is distinctive and unique. In fact, the artwork on the tin alone is enough to arouse the senses.

Let me begin by saying that mine was most likely a one-off. On that note, the wrapper tasted like it was sugar coated before I even lit it. Did taste the clove. However, after lighting, it was a typical cigar, not a strong clove flavor or much anything else. Halfway down, I got a couple really bitter drags, then at a third left, after a relight, it was completely bitter. Didn't bother finishing it. Based on other reviews, it's probably a one off, but I will not be ordering it again.

I love this cigar! A good smoke from start to end. The hint of Nectar flavor is amazing.

I am one of those die hard cigar guys that will typically tell you that smoking flavored cigars means an automatic foul on your man card status. SO, when I tried this one out I realized it was actually kind of fun. This cigar would be perfect if you were out camping and someone broke out the fireball whiskey. It was fun - I will order this cigar and enjoy it again as a way to change it up occasionally for something different.

While I do enjoy the occasional infused cigar, my experience has been limited to the Kuba Kuba. The Ambrosia Van Cleef is my new favorite. It's got tremendous flavor but is still mild. Great smoke!

I am not a flavored or sweetened cigar kind of guy, but if you are, you may love this cigar. Pre-light, it has a very strong clove smell and upon lighting, it is very sweet, to the point of not tasting tobacco, only sweetness. It is well constructed and burns cool, but I prefer sweetness to come from a Pa maduro or a Dominican olor leaf.

Did not realize it was an infused cigar until I wet the cap. Good cut, light, and even burn throughout. Strong numbing clove through to the final third, then tapering to allow the more subtle sweet botanical flavors to come through. Would have ranked higher if not for the intensity of the clove.

Great cigar, great sweet taste, great draw and volumes of smoke, as is expected from Drew. Definitely a desert cigar for me.

When I lighted this cigar it was like I was puffing sugar then the clove hit me killing everything else I could have tasted afterwards.Don't get me wrong, I appreciate a well constructed cigar, that is the only good thing I can say of this one because flavorwise this one is a fail, it smelled like my spices cabinet and tasted like old cloves and cheap honey....not my kind of cigar, I prefer the smell and taste of real tobacco

Great construction, great burn. If you like clove and a very sweet cigar, this is a home run. If you don't like a flavor infused cigar, then move on to something else. Construction and Burn earn a 5 stars, Flavor for me is about 2 stars, just not my thing, Overall about 3 stars

This was the first cigar I chose in my first sampler and it was a very pleasant cigar. Very nice draw, and even burn. I don't usually smoke flavored cigars but was pleasantly surprised with this one.

I want to be fair to the brand.

This is a flavored cigar that smells and taste like a clove.

The cigar itself has a great construction and burns great. If you are into flavored cigars this may be worth a try.

I might have enjoyed it more if it was in a petite size. I could do a 5-10 minute quick smoke as an after dinner cigar rather than a full size cigar.

It takes a big commitment to sit an hour plus smoking an oversize clove.

This cigar has overall a good construction, draw and feel as well as being a good burner but......the taste wasn't very subtle or sophisticated.......I wouldn't chose to purchase this cigar as it's only an average cigar. Not horrible but not desirable either.

...but would smoke again if in the right mood. The cigar smelled heavily of clove before lighting but the sweetness overwhelmed any tobacco or spice taste. After lighting, the flavor was more 'flowery' than spicy. However, the smoke was quite pleasing to those around me.

I'm a big fan of Drew Estates. Undercrown is one of my favorite cigars. Just not quite into the flavored varieties.

As a fan of Drew Estate and flavored cigars, I was excited about this one and it didn't disappoint. The sweet flavor was strong (almost a liquorish taste) and the smell of cloves caught the attention of guests at a party I was at for Memorial day. Everyone loved the smell. I enjoyed this cigar tremendously and will be picking a box up with my next order.

From what I smoked and it wasn't much great draw ,good construction, big smoke, just not a fan of flavored cigars. Felt like I was at the dentist,and they put that numbing stuff on tastes awful then u can't swallow.

A good quality cigar with a nice even draw and burn. A sweet taste that would go great with a cup of coffee. Starts off with a mild impact that builds to more of a medium finish. I would recommend this cigar based on its quality and unique flavor.

OK- Decided to pull out this cigar today and give it a shot. I am not going to do all the talk that is normally around cigar reviews. I was not in a pristine location, with all my supplies laid out- because that's not how I get to smoke my cigars. I jumped in the car, put down the windows, turned up the radio and then clipped the cigar. As I hit the cigar with the flame the tastes of cloves and sweetness became pronounced- but not over powering. Now since I was in my wife's car- I had to have the windows open while driving 70 mph down the highway. The draw was perfect- I was able to enjoy the sweetness of the cigar- without having to worry about it being too strong. The burn was not perfect- but given the situation (real life) it worked out great. There was a little uneven burn, but that did self correct throughout the cigar. I tend to smoke a little faster than what I probably should, but that did not change how this cigar performed. There was not one bit of harshness involved. All together the cigar lasted about 45 minutes. Now normally I like my cigars to be strong- but given the temperature outside, the humidity and that I had to go to numerous garages sales with the wife- I was able to get the necessary kick- without kickin me in the pants. Would I recommend this cigar? Yes. Will I purchase this cigar again? Yes- not only for me, but for those that don't normally smoke cigars. Drew Estate once again has produced a winner

I'm a huge fan of Drew Estate and the Liga Privada and Undercrown lines, but this one just reminded me of a giant clove cigarette. It was extremely tough to draw and cracked in three different spots before even getting halfway through the burn. It tasted like the wrapper was sugar coated, and the clove and spice flavors were a bit overwhelming and numbed the ol' palate. At the midway point it developed some oaky, woodsy notes, which were decent, but it still continued to crack. It did have an even burn throughout, but overall I wasn't a fan of this particular blend. If you like flavored cigars or clove cigarettes, then you should definitely try this one out.

The aroma of cinnamon and spice was very evident. A sweet taste comes immediate while you light up.
I found it hard to draw at first but as I continued to smoke it became easier. The cigar burned true all the way through as I was able to smoke it down to a nub. I usually do not like flavored cigars but I must admit I would smoke this one as a change of pace occasionally.

Great construction and nice, easy draw. Flawless wrapper with good color and a sweet clove (or perhaps ginger spice) taste. I'm not usually a fan of flavored cigars, but it is so subtle as you smoke. Only negative is the sweetened wrapper, otherwise a really nice smoke.

The cigar had a very sweet vanilla taste and was mild... not bad. The cigar also had a great burn and great draw. Not the best cigar to go with a scotch, but a light smoke when you are one the go or on a golf course.

I'm not a Drew Estate fan, but on occassion I do crave a flavored cigar. The Vann Reef is a well constructed cigar with a slightly veiny Cameroon wrapper. The unlit cigar has a pronounced aroma of ground cloves. After making a straight cut I put the unlit cigar in my mouth and took a few cold puffs. I immediately got the sweetness. Almost like sipping simple syrup. It burns nice and even, with a medium gray ash. One inch into the smoke, the sweetness abates, and the clove aroma diminishes. The smoke starts to get a bit harsh. Not obnoxious at that point, but noticeable. Two inches into the smoke, and the ash is still intact, all harshness is gone, the burn line is still even. After 30 second in the ashtray, I lightly tapped the ash off. The next two inches were very mellow with that faint hint of cloves. I smoked it down to the last inch and it was still smooth with a nice burn and ash. Although I wouldn't smoke these daily, I'm tempted to purchase a box for those cravings I ocassionally get.

I prefer more traditional and complex cigars over infused and flavor but I decided to sample the Ambrosia line. The Van Reef was a more mellow and subtle addition to this line. Sweet, fragrant, but not over powering. A nice change from the norm. Great Cigar for a morning smoke.

I'm a drew estate fan,smoked it to the label,loved it,was even more excited to find out it was a drew estate. Will be buying these

The cigar burned nice and had a good draw. Overall, a mild to medium smoke. The only draw back was the clove smell. It just overpowered me. Not really sure what to think of it. So different from what I normally smoke.

I like my cigars like my coffee, beer, and scotch - unsweetened. Nice burn, good smoke, faster burner. Wanted to give it 2 stars. Could not get over the sugar.

Wow, this was the 1st cigar I chose when my sampler arrived.
Hadn't tried one before..this cigar was a nice clean burner, and had a wide open draw...there was a good deal of clove flavor, it actually numbed my tongue...lasted a good hour at robusto size too...Didn't care for this, flavored cigars are not my thing...still, no denying the top construction here...


Show me other "Drew Estate" products