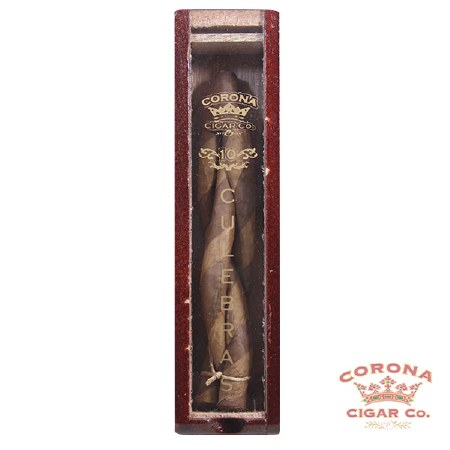 Introducing the Corona Dominican 10th Anniversary Culebra Maduro/Connecticut Cigar. Culebras (Spanish for snakes) get their name from their twisted shape. A Culebra is actually three Panatella sized cigars intertwined into one cigar. Some Culebras can be untied and smoked as three separate cigars. However, our Culebra is meant to be smoked all at once, creating an easy-drawing cigar with a nice combined ring gauge of three, 33 ring cigars.

Corona's Dos Capas Culebras are offered in two varieties - a Maduro/Candela and a Maduro/Connecticut combo. Both varieties use a mild blend of Dominican long filler tobaccos and have a rich, smokey flavor. Each cigar is nicely packaged in an individual cedar box and priced reasonably enough to be added to your daily cigar selection.

My experience with the Corona Culebra was mediocre at best at first the draw was pretty even but about a third of the way in ,one of the cigars started to not draw so well and kept going out.

Very uneven burn out of a full box about only 5 burned well. I liked the taste but because of its poor burning qualities and the fact that the wrapper split and unwrapped during smoking I would not purchase again.

This cigar had a good taste, nice ash, started to run half way through it, but over all a good smoke.

Pre-smoke: Good texture, nice aroma, firm but not dry and "crispy" sound under the pinch.

Smoking: Nice lighting and draw, smooth and easy to smoke. Three distinct flavors from first 3rd light and nutty, second 3rd moderate and leathery, last 3rd a bit stronger, but still pleasant. No runs and even burn to the nub.

I have never had a wedge and didn't know the right cut, but made a clean v notch and it drew fine.

Good looking cigar with a mid weight pack. Nicely made with a dark brown waper and great smell of tabacco and musty earth. The wedge end had what looked to be a triple cap . I took one off and had a great draw . The pre light was sweet tea and spice very nice . The first third had a lot of smoke with a deep tabacco and some spice taste . Then about one inch in it picked up some chocolate flavor . Second third was nice with a bit more spice and strength . The last third kept the chocolate and ramped up the spice . This one made me want to burn my fingers . You should try it . I know i will be getting more . Over all very nice stick

Another surprising cigar by Corona! The packing was consistent and the wrapper had a mild aroma. The wedged end took some getting used to...I'm more accustomed to a round end. It burned fairly evenly with thick smoke and a decent aroma. The taste was peppery and smooth. It is a slightly medium cigar, with very little after taste. Another decent cigar for the value!

I must admit that I have tried several blends/brands of the candela wrapper and didn't like them. This blend I thought was the best and most balanced that I have tried. It is a very tasty smoke and I would recommend it to anyone. Well constructed, with a good ash. The Wedge shape is surely a plus and maybe the cigar industry will make more gars available in this size/shape. Corona Cigar Co. is GREAT in products and customer service, THANKS!

This was my first candela wrapper and it was a nice change in flavor. Was a smooth very soft draw. Flavors stayed pretty much the same throughout the cigar. Had a slight spice after taste, good combination. And the wedge head is very comfortable.

I thought that this cigar had such a cool design. The wedge tip allows you to pinch it and it splits just enough to provide an excellent draw. This candela provides you with a mild to medium bodied creamy smoke. I can definitely say I enjoyed this stick.

First off, I'm not a fan of candela much less wedge cigars, although the good thing is that you don't need a cutter. Nice construction, even burn. It started off nice but it is not tasty. It's mild, somewhat flat and not at all complex. Third of the way down, it turned on me but after getting through the middle, it came back. Not that enjoyable a smoke.

Nice easy draw, very well contructed with even burn right to the end. Mild to medium body with full flavor. Seemed consistent right to the nub. Pleasurable smoke!
Pretty neat how the head can be pinched and pops open perfectly without having to use a cutter.

Smooth and delicious. My first wedge cigar and I really like it. The wrapper is very firm and well constructed.It has a medium draw. No burn issues at all.

This 6×54 stick offers a light green, firmly packed wrapper showing minimal veins and tight seams with a flat, wedge shaped point at the head. The aroma is a mellow tobacco smell, just a perfect smell. Starting off it gives out huge volumes of smoke with a very easy, free draw. Flavors are peppery with a hint of sweetness. The core is an aged tobacco, very smooth with a good bit of pepper kick that comes on the end of the draw holding and building through the long finish. 40 min in at the 1/2 way point flavors remained very consistent, still mild-medium bodied. The last third mellowed the whole stick out – the body stayed around a mild-medium, the aged tobacco changed to a slight, very little earthy taste. The pepper zing stayed around, and the sweetness came down a bit. burn was excellent all the way down, holding the ash in thirds for a total burn time of 1 hour. This is the best Corona cigar I have ever had! You need to pick up at least a box of these great cigars! Thank you to Corona Cigar!