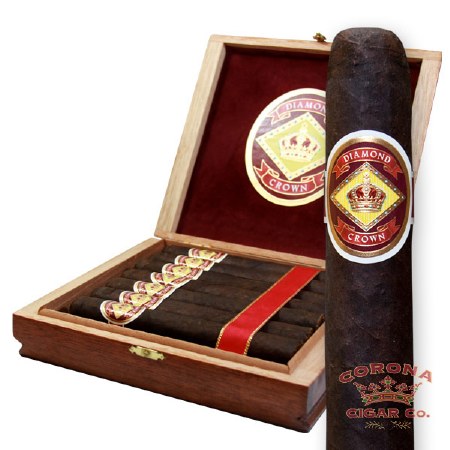 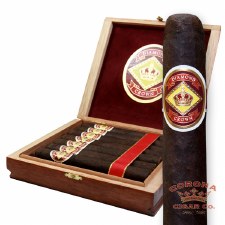 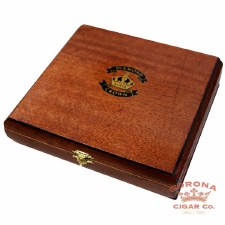 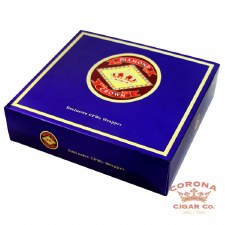 Excellent smoke! Good draw - great taste. A bit pricey - not my everyday smoke, but a great choice for that special occasion.

Smooth & nutty.... had this cigar with brunch out on the patio with a cappucino. I thought it would be much heavier than it was - don't judge this one until you've enjoyed it. I was pleasantly surprised and will be ordering more shortly!!

What a great smoke. A bit on the mild side, but otherwise perfect. I could smoke this cigar every day and not get tired of it. 5 Stars.

This was my first Diamond Crown and I was not disappointed! I was a little apprehensive at first with the dark Madura wrapper but was pleasantly surprised. Nice flavor, good burn, easy draw. A very nice cigar!

I've read other reviews and was excited to try this cigar. Personally, I found this cigar to be average. Nice draw and burn, a little bitter. While I wouldn't turn down this cigar, this wouldn't be my first choice. It is worth noting that my uncle is a lifelong cigar buff and he loves Diamond Crown, so, everyone is different.

This is a very nicely constructed maduro that delivers a medium to full flavor. The cigar has a nice smooth draw and produces nothing but ash. I would happily recommend this stick to anyone that enjoys a medium strength cigar.

I really enjoy this cigar with its medium to full flavor. This cigar has the kind of bite that i enjoy. This was a good smoke.

The construction is perfect, the aroma is perfect, the burn is perfect and the flavor is perfect. If you are looking for a special occasion cigar, look no further. I enjoyed this one on my deck with a glass of Glenmorangie and they paired extremely well. You could pay more for a cigar - but why?

The Diamond Maduro had a great draw, and mild taste- just enough but not too much. I recommend this cigar to go along with a nice scotch. Great smoke.

What a pleasant surprise. Normally I hate when people mention flavors of leather or very creamy etc. But in this case, I would have to say that it was a creamy smoke and very enjoyable.... until the last third- at which point the wrapper started having issues. I toughed through it- but it definetly changed this from a 5 to a 4

Easy cut, light and burn. No relight issues. Starts with a good hit of pepper which diminishes through the first and second third, and comes back strong in the final third through to the finish. Dominate flavor of leather throughout with streaks of wood blended in. Nice production of smoke. Medium strength. Complexity is not overpowering.

This is one of the best tasting cigars I've ever had. Excellent retrohale. This one's a keeper!

I fully expected this to be a very mild cigar, but was amazed to find a nice medium strength smoke. A very well constructed cigar that was nothing but ash as it burned down. Provides plenty of smoke and flavor. Worth having in the humidor.

This cigar is a decent but a not as good as it's advertised. Burn was a bit uneven, light was inconsistent and I needed to relight several times. On the positive side, mild fairly consistent flavor, good draw, nice smoke volume. I wouldn't buy it though.........respectable but nothing to get too excited about.

This dark cigar is very well constructed, consistent draw and great smoke volume. On the less than perfect side, uneven burn but at least stayed lit. A bit of variance in taste and a mild bitterness towards the second half. Very respectable little cigar but not quite up to my high standards.

Excellent Dominican! Nice wrapper, even burn, firm ash. Outstanding draw. Everything a Dominican should be, but not what many are. I'm getting a box of these!!

Mello and mild. This cigar has enough back bone to keep it from being dull...and is mild enough to puff on to the nub. Bright and herbal. Pair great with W.L. Weller.

Was expecting a lot from this cigar being from Fuente, but it left me wanting more, not any transitions of flavor. Just a consistent mild cigar, burn and draw were excellent.

The Natural was very smooth, mild and mellow and burned sharp and even from the get-go. It had a clean, nutty-cedar-vanilla taste with hints of pepper throughout, which became more prominent towards the end. It had lighter, flavorful smoke that developed a creamy caramel aftertaste midway. Personally, I prefer the maduro 10x over the natural, but it was still a good burn that deserves a try.

I had smoked the Maduro version last week and was expecting the same great burn and taste, but it did not get there. The wrapper unraveled as I smoked the last third and the taste was more than a little bitter when compared to the Maduro. Personally I will stick to the Maduro which was a true finger burner (wonderful), when I smoke Diamond Crown.

Great Looking almost black in color. The cigar was packed full of tobacco. The cigar was hard to the touch. Good amounts of smoke and a nice even burn, but little if any discernible flavors. It was an average at best, medium body smoke. I was hoping for something throughout... leather, coffee, pepper, something, but it just stayed plain.

Many cigar smokers see a maduro wrap and run for the hills. This is a very smooth and mild cigar. This would be a great gift for the novice cigar lover who would like to experience our wonderful hobby.

Great cigar with a great draw!!

This cigar was smooth, easy to smoke with a great blended flavor. I haven't tried Diamond Crown before, but this will not be my last.

Pulled this bad boy out today. Here is my pristine location to enjoy this smoke. My neighbors front yard while having a beer and watching all the kids play. As I lit this cigar, I knew that it was going to be a good night. The cigar had a nice flavor profile, with good smoke volume. You know that you are smoking a good cigar when the non-smokers are commenting that it smells good. Being that I tend to smoke cigars a bit on the fast side, there was no harshness detected at all. Did I mention that this was a very good cigar? By the end of the cigar I was looking to see if there might be another in the humidor waiting to turn to ashes as well. Unfortunately there wasn't, but I can tell you that in the future, this will be in my humidor.

Firm with a thick and even wrapper. Draw and burn were perfect. Smooth, rich flavor with hints of pepper.

This is one mean stick with incredibly rich flavors and a super solid construction. From the get-go, the palate is bathed in silky smooth flavors of chocolate, pepper and spice, along with notes of oak and leather. This luscious chunk of lumber burned flawlessly for close to an hour and a half without ever losing its boldness. The only reason I quit smoking it was because it was burning my fingers and singeing my facial hair. Even if you don't like cigars, BUY A BOX OF THESE!

The Diamond Maduro has a nice draw and a quality burn. I'm not a huge fan of Maduro but this cigar was wonderful. I would enjoy another in the future. I had to smoke it slowly because I didn't want the experience to end. I found it to be mild and very pleasant. A very good smoke.

When I enjoy smoking a cigar I smoke it till my fingers burn, just can't put it down. This is one of those cigars. Smooth taste, wonderful draw and aroma. Just buy it and enjoy, but watch your fingers.

I unwrapped this cigar thinking it was going to be a real strong smoke. The construction was 'bulletproof'. Tight and firm with a wrapper the shade of dark walnut. I gave it a straight cut and fired it up. The first draw was surprising. MILD. No fancy dance complex tastes or flavors, just good tobacco. The ash was a medium/dark gray and held firm. I smoke this down until it burnt my fingers. The flavor never varied. I'm buying a box or two of these!

Fantastic cigar. An elegance similar to the Cuban Montecristo Edmundo, with better taste. JC Newman didn't skimp on the tobacco in this one. Rock hard and a slow burner. Maduros are not my first choice, but this one is awesome. Great way to finish off a steak dinner.

This looked so perfect, I almost was sorry to light it...But once I did, whoo boy...I lit this one for my 60th birthday...If I could afford to do so, this would be the only cigar I smoked...perfect mild taste, with a little sweetness perfect burn and draw...This is a premium cigar in every respect...wow...

The wrapper was beautiful, dark brown, almost black, and without a single mar. Looked more like an oscuro than a maduro wrapper. Pre-light draw was nice and nutty, with no draw problems at all. There was one slightly soft spot near the band, but it burned very well throughout, only needing a touch-up once. Ash was salt and pepper and held together very nicely. A very well constructed cigar. This Diamond Crown is milder than Maximus but I would say its more on the medium side than mild. Fantastic Smoke!!

Not a maduro fan, but this was a pleasant surprise. Burned nice. Would put these in my humidor.

Mild.
Cons: Not a cigar I would procure. Mild with little interest. First lite was a little bitter. Wrapper was not appealing.
Pros: Exceptional burn from the beginning. Excellent/plentiful smoke. Mild to the nub.

This cigar has a very dark, almost black finish. It smoked much smoother than I thought. Packed really tight, I thought I might have a draw problem - but no. Smooth, creamy and mild to medium. Will definitely try another

This cigar was smooth with a great flavor. A definite try that won't disappoint.

I love this cigar! Its smooth,rich, creamy, and even has a natural sweetness to it. By far the best Mild cigar I've ever smoked.


Show me other "Diamond Crown" products