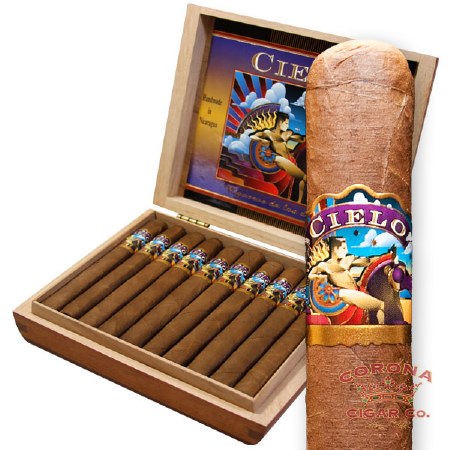 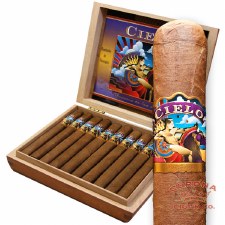 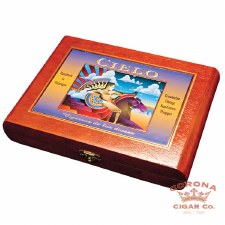 Cielo Eros Cigars use a rich, coffee brown Ecuadorian Sungrown wrapper and an all Nicaraguan blend of aged filler tobaccos. This gives Cielo lots of deep, complex flavors of coffee, leather, earth and spice but with a medium bodied strength.

Cielo cigars are hand made in Esteli at Tabacalera Perdomo. Over the years, Nick Perdomo has been expanding his tobacco growing operations in Nicaragua. This has allowed us to use even better quality tobaccos and not raise our prices in ten years. (We even absorbed the Federal cigar tax increase in 2009.)

Cielo cigars are one of my personal favorites from Nicaragua. We launched this brand back in 2001 and ten years later, Cielo is still going strong. One of the reasons for the popularity of Cielo is the great value and consistent quality this cigar delivers.

Why am I leaving a review? Just a jo schmo.
Who knows?

I won't speak as to the construction, I enjoyed the flavors (just started retrohaling)- I thought all the reviews I saw, maybe I'd want the Apollo size, the Poseidon size is perfect for me. This will be my go to daily(ish) until something else comes along at this price point. I have the corona maduro nicaragua, haven't tried their dominican for the review that says buy the coronacigar co. ones (both are corona co but you know..)

my palette *My favorite is the Long live the king, 1st I tried aj hernandez then i tried mad mofo. The last 1/3 or less on both is this chocolate hazelnut almond mmmm. I dont wan't it to end

This cigar brings back memories of my trip to Orlando and I love it. I got a box of 7 x 52's and I should have gotten 6 x 52. Draw is inconsistent but the flavor is smooth and tasty. I would recommend this for anyone looking for a good sungrown.

Notes of coffee and chocolate throughout the whole stick. Great draw and lots of smoke! I'll definitely be buying a box of these soon.

Several things sold me on this cigar. Number one is that the cigar is a a mild to medium blend. The cigar is box pressed. The box is stunning to look at. Bryan Glenn from cigarobsession.com was wowed by the cigar. Most importantly. the cigar is made by Nick Peromo's factory - and I like anything he makes.

The cigar had a slightly snug draw on the pre-light, but that proved to be no problem once the cigar was lit. The cigar had a great smell, very nice construction and huge volumes of smoke came from the cigar. Ash was fine and held on to at least a couple of inches. The flavor profile stayed consistent all the way through - as do most cigars from Perdomo. This is a box of cigars I am glad I purchased and I would recommend them to anyone who likes mild to medium, box pressed cigars.

Excellent stick for the price!! Started out with a pepper blast but quickly settled down to a creamy choclaty flavor. The draw was excellent and although the burn was not straight it needed no attention. Overall great construction, good flavors, great price! Grab some!!

This cigar was pleasantly surprising. Construction was good and it smoked straight, no runs and a nice easy draw. I picked up just a hint of nuttiness that didn't overpower. All in all, it was a good smoke.

This cigar started off like it was going to be enjoyable but after the first 3rd it just went bland. Good smoke and decent burn, but not one I would try again.

The cigar was well made with a darkish tan wrapper nice soft feel and a large double cap. Rich wet hay smell. It had a very cood draw and burn was great . The first third had a spice on the draw that went to a hay with a sweet finish . Second third lost the spice but the hay and sweetness was still their . It gave off lots of smoke Into the last third the spice would come and go with some leather mixed in . I let it go out at about 1" but i really didn't want to .. I really liked this one and have plans to get more. I think with some age this would be a 5 star cigar

I've smoked the Cielo brand before, and although not a favorite of box-pressed cigars it's good enough to try again. The draw was adequate throughout and the flavor was okay to the end.

I agree with most of the flavor posts above... And it was fine, in that respect. My main issue with it was the draw. I felt like I was trying to suck concrete through a straw. Like I said, otherwise, it was good. I'd smoke it again, if it was given to me, but not sure I'd spend money on it...

Nice construction, smooth wrapper. Foot had slight smell of ammonia, but the cold draw was sweet & smooth.
1/3: The first puff was rough, but it immediately turned to sweet & smooth. The draw & burn were perfect.
2/3: Leathery & creamy flavors, with thick white smoke. The burn was still perfect.
3/3: A spiciness appears, but only on the retrohale. The burn got a little wavy but always corrected itself.
Started to get really hot with 1.5" left and started to make my tongue burn, so I put it down. Not a bad smoke at all.

Uneven burn, but a good draw a medium flavor with a moderate spice, that gets bolder as the smoke gets to end. A pretty pronounced after taste that lasts, Leather, earthy, and spicy notes. A medium to bold smoke...

Burn: not a smoke to have with your best scotch, maybe a beer. Spicy and sweet, but evolves into a bit strong and bite at the nub. Nearly impossible to keep an even burn, must touch up often.

The box pressed Cielo didn't offer me much. It was wrapped loosely and burned quickly. The flavor was very mild, but very ashy. I couldn't distinguish much other than that. For the price, Corona's own cigars would be a much better choice.

Started out harsh then mellowed out without that much flavor got better towards the end. Good fishing or grass cutting smoke.

Nice smoke if your time is short. Like the box press and size. A little sweet and spicey.

Started off I thought harsh. Began to smooth out and became a fair cigar. The last third was terrific. First 2/3 OK. Type of cigar I think the more you smoke of them the better you like them.

This cigar burns great all the way through. It does lack the taste and flavor of a good cigar, but that is also why it is a couple of dollars less per stick. I keep some of these in my humidor share with friends when they come over. All in all this cigar is not bad by any means, I'll definitely keep buying.

There is a natural sweetness to this stick that I enjoyed very much. The stick I had was box pressed and those are always very easy smokers as well as an even burn.
The flavors themselves come across to be very distinct and are very very nice. A great stick for someone who seeks something milder with a lot of flavor.

A little too tightly packed, making it take some effort to draw. Not very flavorful, just middle-of the-road.

Started mild with lots of spice. Became a bolder and fuller body half way thru. Carried the ash well. Made for an quick enjoyable smoke.

4 of 4 people found this review useful:

Draw and burn were perfect. Love the box press. Started off a little peppery but quickly turned into complex flavors of chocolate and coffee.

0 of 2 people found this review useful:

Has some flavor, but not long lasting. Has a poor draw and this leads to a poor finish.