Rocky Patel 15th Anniversary Cigars are one of those special cigars that have achieved acclaim from the cigar industries top cigar critics. Named one of the top twenty-five cigars of the year, and rated 93, the Rocky Patel 15th Anniversary Cigars are considered to be the best cigar released to date from Rocky. Made with a ripe blend of Nicaraguan tobacco and binder then concealed under a shimmering Ecuador Habano wrapper, these cigars scream quality. The cigar comes box pressed with a bevy profile of coffee, earth, spices and pepper. A brilliant cigar that all medium to full-bodied cigar lovers will enjoy right down to the nub. 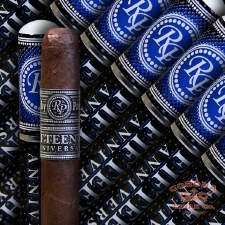