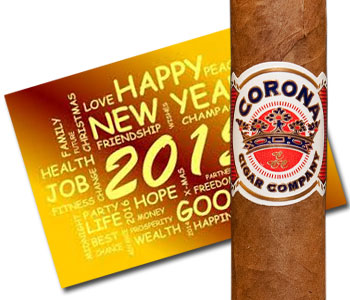 Certain holidays and festivities are associated with distinctive symbols. What would the Fourth of July be without fireworks, for example, or Halloween without a pumpkin? And where would New Year’s be without a party hat and a fizzing glass of champagne? Throw in an old man with a scythe and a newborn baby, then the list of New Year's symbols is complete.

But while it’s great to take part in the traditional celebrations, it’s also great to spice it up a little. That’s why bringing a cigar sampler to a New Year’s Eve party—or enjoying one with a partner or close friends as you watch TV—is such an inspired idea.

To enhance the upcoming luck of the new year, for example, you might try our Lucky 7 sampler. It allows enjoyment of some of the best cigars in the world, including Gurkha, Boris 11, Corona Gold and Cielo; all available at Corona Cigar Co.