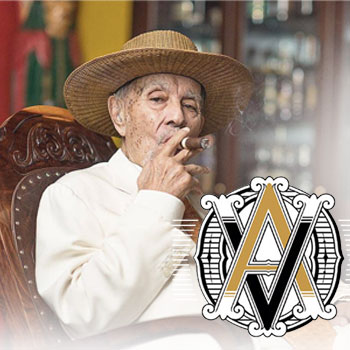 Musician Avo Uvezian is the man behind Avo Cigars. Uvezian was born in 1926 in Beirut. In his early years, he played music all around the middle east. At one point he was the personal entertainer of the shah of Iran. In 1947, he moved to New York and entered the Juilliard School. By the 1960s he was writing music.

In the early 60s, a friend introduced Avo and his music to Frank Sinatra. According to Avo, Sinatra liked his song Broken Guitar but hated the lyrics. Studio songwriters took over and the song became Strangers in the Night. This should have been Avo's big break, but he didn't get credit for the song. He had sent the song to a friend in Germany who published the song under his own name. Avo's friend Bert Kaempfert is credited with the composition. Disillusioned with both the music business and New York, Avo left town.

Avo ended up in Puerto Rico in the jewelry trade. He played piano in hotel bars and sold real estate. The stories vary about why he decided to go into the cigar business, but he traveled to the Dominican Republic and met master blender, Hendrik Kelner. Together they created the Avo Classic.

Today, Avo cigars are one of the most prestigious premium brands. As a nod to Avo's musical career, Avo cigars has issued limited edition cigars with a musical connection. The Avo Classic Covers Volume 2 is the second release of the new Avo Limited Edition Improvisation Series. The box for these medium bodied cigars looks like an LP.

Looking at the shiny black box of the Avo Uvezian 88 Limited Edition cigars, you might think the "88" refers only to piano keys, but these medium strength cigars are also a celebration of Avo's 88th birthday.

The medium to full flavored, Avo 90th Classic Covers Volume 3 cigars are in a unique box that resembles Avo's personal turntable and celebrate his 90th birthday.

The stories from and about Avo Uvezian are cigar folklore. Whether the stories are all true or not, they add a certain mystique to the Avo brand. Please contact Corona Cigar Co. for more information on Avo cigars or any other brand of fine cigars. We are always here to help you find the cigar that best suits your taste.