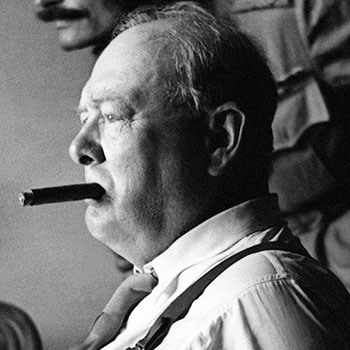 In his nine-decades-long life, British Statesman Sir Winston Churchill, it's been estimated, smoked a quarter-of-a-million cigars! Romeo y Julieta were his favorite.

His passion – yes, it truly was a passion – for cigar-smoking began in Havana, Cuba, when the 21-year-old was sent there with fellow Brit officer, Reginald Barnes, to observe, and write about, the Spanish/guerilla conflict.

Recognizing Sir Winston in photographs is a snap. You'll know him by the cigar clutched between either his teeth or his fingers, and the Lock & Co. Bowler hat or Homburg on his head.

Hatter Lock & Co. has its own claim to fame. It's the oldest hatter in the world (1662). They once received "A postcard from abroad addressed to 'The Best hatters in the world, London.'"

... born into an aristocratic family, on November 30, 1874. His mother was American-born Jennie Jerome, and his father was English-born Sir Randolph Churchill.

... a student at Sandhurst Military Academy and lived an officer's life for a time.

... called fearless and courageous. He left an incredible, indelible mark on his world as author, painter, politician, and statesman.

... the subject of a movie, "Darkest Hour," about his leadership role during World War II, 52 years after his death. It's been nominated for six Academy awards.

... a cigar-smoker extraordinaire. A cigar was named after him.

Both were elected to Parliament.

Both died on the same day, seventy years apart.

One half-smoked cigar was scooped up by a Brit airman in a Paris airport in 1947. It later sold for $12,000 to an unknown American buyer.

In May 1940, Winston Churchill served his beloved England as Prime Minister, shepherding fellow countrymen to victory.

That same year, he won a Nobel prize for Literature.

On January 24, 1965, nine days after he suffered a stroke, Sir Winston Churchill passed away, at age 90.

"Darkest Hour" star Gary Oldman smoked cigars throughout filming. He jokes that, while fellow cast and crew enjoyed their Christmas holiday, his gift to himself was a colonoscopy. He no longer smokes cigars.

Have you tried Sir Winston's favorite cigar yet? To view our robust inventory, contact us.