Pairing Cigars with Spirits and Wines 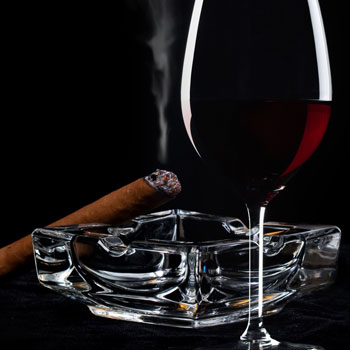 According to a recent article in the Birmingham News, there are a few hard and fast rules. For example, one should avoid having white spirits such as vodka or gin along with the cigar as the cigar would overpower the taste of the drink. Cognac, single malt whisky, bourbon, rum, rye, and port are classic beverages that go along with cigars. However, some will take a good smoke along with a craft beer as well. One should not allow the cigar to overwhelm the libation or vice-versa. The trick is to match the body of the cigar with the body of the liquor or wine.

Learning how to pair a cigar with an appropriate adult beverage involves learning how to use your sense of taste. The more you practice, the better and more refined your sense of taste becomes. In other words, to learn to choose which drink to have with which cigar, you should experiment, mixing and matching cigars and drinks until you find out what works for you. Discovering which pairings work best for you will be a satisfying process, yielding hours of pleasure.