Mark Twain's Cigars Were His Muse 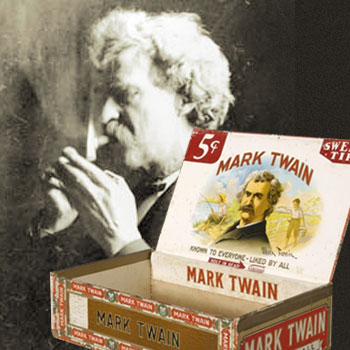 Besides being the author of such classic works as “Huckleberry Finn” and “Innocents Abroad,” Samuel Clemens, known to most people by his pen name of Mark Twain, was a life-long lover of fine cigars. Indeed, he first picked up the habit at the tender age of eight years old in his boyhood home of Hannibal, Missouri. At the time, Missouri had a vibrant tobacco growing industry and, as Clemens claimed, anyone who could afford anything could afford a cigar. Still, as a boy, he was reduced to taking stubs that had been discarded on the street or exchanging buckets of water for cigars at the shop in his hometown.

As Clemens rose to adulthood and gained fame as a satirical writer, he consumed an average of 22 cigars a day, an immense habit even by the standards of the 19th century. He tried quitting from time to time, but never managed it for very long. The problem was not just a physical addiction. He said that he would often find his muse in swirling cigar smoke. The great characters he created, including Tom Sawyer, Hank Morgan, and Tom Canty, were born as Clemens puffed on a cigar. He was rarely seen or, in later years, photographed, without a cigar.

Clemens lived to the age of 74, joking that he had come in with Halley’s Comet and would go out with it and actually did so the day after it was sighted in 1910. In his later life, he had grown quite cynical about God, the goodness of man, and the prospects of a heavenly afterlife. He was quoted as saying, "If smoking is not allowed in heaven, I shall not go." One can only hope that Clemens is holding forth, even now, his face wreathed by cigar smoke in some version of a celestial salon.