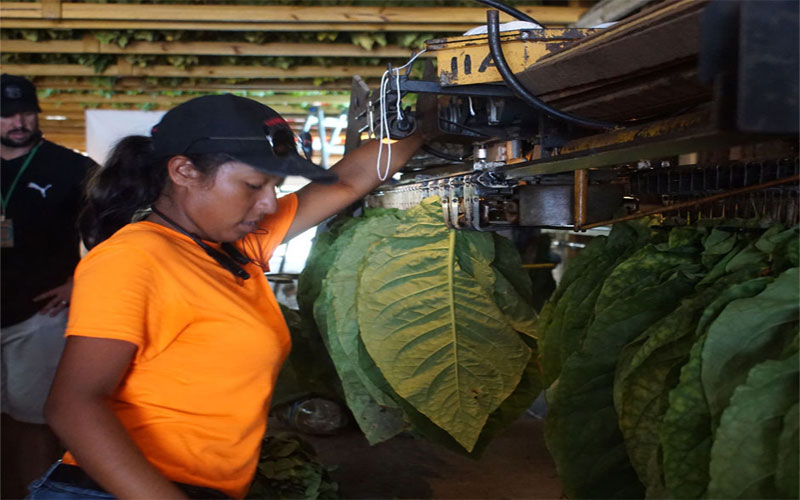 CLERMONT — On Saturday, June 4, 2016, at a remote farm in south Lake County, about 200 people came together to welcome a new arrival into the world. We're talking cigars here. After four years of planning, planting, curing, blending and rolling, Florida Sun Grown Cigars were finally released to the public.

The location of Saturday's debut made perfect sense, for that little farm is the source of the unique ingredient in the premium cigars — Florida-grown tobacco.

Florida was once a major player in the tobacco industry. A little area centered in Gadsden County had a thriving tobacco business, mainly producing the shade-grown tobacco used for wrapping cigars. That industry tanked decades ago due to changing consumer habits, rising wages, plant disease and the proliferation of the homogenized tobacco-like paper product used to wrap today's economy-priced cigars. It became almost impossible for Florida tobacco farmers to make money on their labor-intensive crops.

But the market for premium cigars has never gone away and some, such as Jeff Borysiewicz of Orlando-based Corona Cigar Company, and John Drew of Nicaragua-based Drew Estate, are determined that it never will.

Borysiewicz is the man behind the pretty little 10-acre tobacco field in south Lake with the sugar-cane wind break. He figures his tobacco crops are the first in Florida since 1977.

"You can't make money on the tobacco," he says. "We subsidize this from the store. We do this to offer a unique ingredient in our cigars."

Reflecting on his son's big day, dad Mel Borysiewicz says, "I'm very proud of him. He worked very hard to get here."

Florida Sun Grown (FSG) is available exclusively through the Corona Cigar Company. They're not the priciest cigars the store offers, but at $11.50 to $15 each, they're not cheap either.

Drew Estate is the company that actually makes FSG cigars. The tobacco from south Lake, once properly dried, is shipped in climate-controlled containers to the Drew factory in Nicaragua, then cured, processed, blended with tobaccos from other sources, wrapped and rolled, and shipped back to Orlando.

The Drew Estate slogan is "the rebirth of cigars," and in their diversified approach to marketing, they even conduct "cigar safaris" in and around their Nicaragua headquarters. Not surprisingly, it was the Drew Estate team in charge of the event on Saturday, which was officially dubbed the "Florida Barn Smoker." Borysiewicz figures it will be an annual event, making the Corona Farm in south Lake a real live eco-tourism destination.

At the Barn Smoker, which was a ticketed event, visitors heard speeches for the special occasion, they had a certain amount of food and drink, they had the opportunities to take selfies in front of a real tobacco field, they got an up-close view and explanation by John Drew of at least the beginning parts of the cigar making process — and they got to try out the new cigars.

Talking of her first FSG smoke, Dominique DiCamillo of Apopka says, "It was a layered smoke, very velvety, with copious amounts of white smoke. It had a sharp line throughout and it got spicier near the end. It would be a very pleasant everyday smoke, and it had a beautifully consistent long ash."

Richard De Fran, who is new to the cigar world, took his first FSG smoke one day after the event.

"It had a nice aroma," he said. "Even before lighting up, the smell was pleasant. It was relaxing and it kept the mosquitoes away."