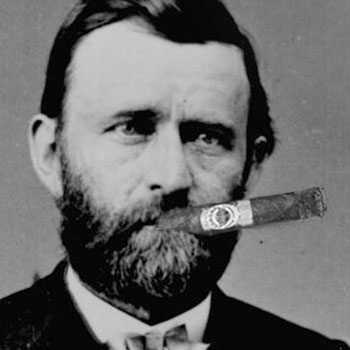 When thinking of the great battles of the American Civil War in the 1860's, what comes to mind? Shiloh, Vicksburg, Appomattox...but few remember the turning point of the war: the Battle of Fort Donelson where Brigadier General Ulysses S. Grant won the first major Union victory. For the grateful citizens of the times, however, this was a most memorable moment: seeing their Army Commander for the first time in the papers chewing a cigar, relishing in victory.

After this single image was printed, Grant began receiving cigars by the crate - legend has it he received over 10,000 boxes of the best cigar brands available! Whether or not he was an avid cigar smoker before his image became synonymous with cigars, he certainly was after the battle of Fort Donelson. While we don't know exactly what brands he preferred, we do know that he smoked up to 20 cigars a day and would chew on the end for a long time.

UK based magazine "The Spectator" has inaugurated a "Cigar Smoker of the Year" award which went to Arnold Schwarzenegger in 2014 who prefers a "Punch" after dinner.

Cigars are chosen based on a number of criteria, first and foremost "smoke-ability". The experience of a great cigar should be smooth, relaxing, and leave a lasting flavor. Like a fine wine, cigars are also rated on "compatibility" with certain foods and even atmosphere. A hearty meal should be followed with a "light" cigar, a robust cigar goes best with a well-aged vermouth.

Choosing your cigar brand takes a little time, a little experimentation and even a little research. Before you know it, you may fall in love with Churchill's favorite Romeo y Julieta, you may find yourself smoking a victory cigar that becomes your trademark brand, or you just might be making history with a cigar in your hand.

Contact us today for the widest selection in premium cigar brands.