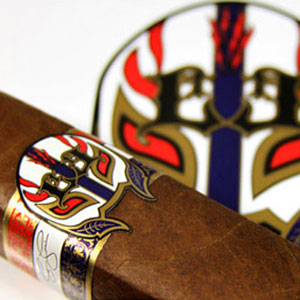 Thanks to the movie Nacho Libre and the cartoon Mucha Lucha, even people who aren't wrestling fans know about the Mexican Lucha Libre wrestlers called Luchadores.

A Luchador is a wrestler wearing a colorful mask who makes high-flying moves in the ring. Many of those moves have been adopted by wrestlers in the US and Canada.

Sam Leccia is such fan of Lucha Libre and the Luchadores that he launched the Luchador line of cigars in 2014. Now the line includes Leccia Luchador El Gringo cigars. The El Gringo line is a mix of six tobaccos in a Nicaraguan Oscuro wrapper and a Nicaraguan Habano binder. They are medium-to-full bodied cigars with notes of dark cocoa, toasted almond, and hints of peppery spices.