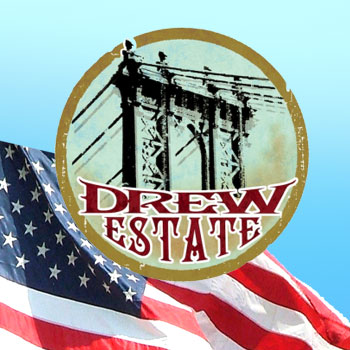 The story behind the founding of the Drew Estate Cigars company is unusual, to say the least. Unlike other cigar companies, Drew Estate is not a business built by generations of cigar makers, handed down from father to son. The unlikely founders of Drew Estate are a pair of frat brothers from New York City, Johnathon Drew and Marvin Samel. Beginning in 1998, they built their company on a foundation of passion for cigars and a can-do attitude.

Drew moved to Esteli, Nicaragua in 1998 to operate their tiny factory, leaving Samel behind in NYC to tend their 16 square foot kiosk in the World Trade Center. The first cigar introduced was their affordable La Vieja Habana line. It boasts a NYC/Traditional Nicaraguan Art Deco feel, and is a great value.

The Business Begins to Expand

In 1999, Acid and Natural were introduced. Natural is the yin to Acid's yang. Natural cigars are crafted using the finest Nicaraguan leaf combined with traditional black tobaccos from Syria, Turkey, St. James Parish and other exotic locales. Acid cigars vary widely in which tobaccos are used, and are truly an individual and unique experience.

In early 2001, Forbes magazine listed Drew Estate in an article about "cult brands", alongside Krispy Kreme and Apple. This was a great addition to their growing rapport with cigar fans.

La Gran Fabrica, Drew Estate's impressive new factory, is not your typical factory. Instead of the typical dreary cinder block type architecture of most cigar factories, Nicaragua's largest cigar factory is an Art Deco paradise, with stunning, hand-painted murals and lots of open working space. You can go tour their factory and see some of their newest cigars, such as the infused AMBROSIA Tobaccos Exxotica and Americana-themed Kentucky Fire-Cured Cigars.