Cigar Brands Making News: Are You Wondering What’s Up with Dunhill? 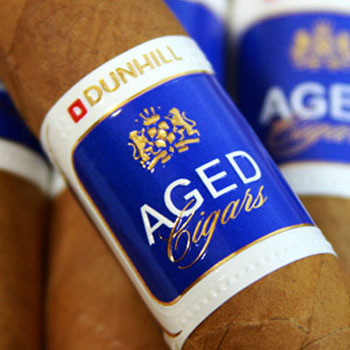 Dunhill Tobacco of London is one cigar brand that’s been making news in 2015. Word on the street has it that they’ll be releasing new offerings soon. At least that was the scuttlebutt at the International Premium Cigar & Pipe Retailers 2015 show, which took place in mid-July. As proud carriers of Dunhill Aged Cigars, we’re looking forward to seeing what their team has come up with this go round.

Personally, we think that the Dunhill Aged Cigars are amazing. Crafted in the Dominican Republic, the cigars offer Connecticut broadleaf fans mild, smoking experiences. We sell them as singles and in boxes of ten. Rumor has it the new line will feature full-bodied cigars but we’ll just have to hold on to our cutters and see when the time comes. In the interim, we’ve got the aged variety as well as the cigar brand’s line of pipe tobacco.

The pipe tobacco line is traditionally packaged in decorative tins that typically hold 50 grams. Given the type of pipe involved, that’s roughly 16 bowlfuls. And at this time, the notable cigar brand produces at least a half-dozen flavors of pipe tobacco to choose from too. Some of them are made with mixtures of Virginia, Latakia, Oriental, Perique and Cavendish tobaccos. Thus, they tend to have mellow undertones.

If you want to sample their full flavored tobaccos, we’d suggest buying a tin of Royal Yacht, Nightcap or My Mixture. They may give a hint as to what’s to come with their latest foray into the full flavored cigar market. Those seeking medium strength offerings should look towards the Standard or London Mixture. Mild fans should contemplate starting out with the Early Morning Pipe variety.

To learn more about the entire line of Dunhill Tobacco of London’s cigar brands and pipe tobaccos, please contact us at the Corona Cigar Company.

This just in. Since this artcile originally posted, we've received a shipment of the new Dunhill Heritage Cigars. Classy and flawlessly constructed, Dunhill Heritage Cigars have an exceptionally smooth and oily wrapper, so very luxurious and dark, and impressively well put together. We strongly recommend you get yours today.