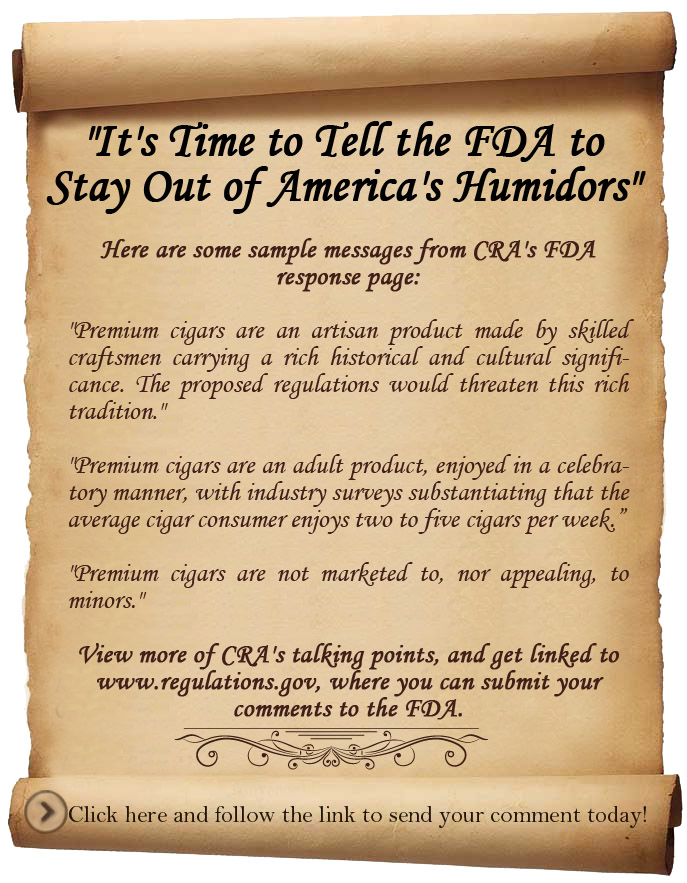 Cigar Rights of America Statement on Issuance of Deeming Regulation By the U.S. Food & Drug Administration

WASHINGTON DC - On Thursday, April 24, 2014 the future of the premium cigar industry, and the ability of customers to choose to enjoy premium cigar products, may have changed forever. Since April of 2009, Cigar Rights of America (CRA) has issued a clarion warning that once the U.S. Food & Drug Administration was granted regulatory authority over tobacco products, in time, cigars would be threatened. That threat is now a reality.

Over the last four years, CRA conducted a comprehensive federal campaign to educate Congress, the FDA and the White House Office of Management & Budget on the fundamental differences between premium cigars, and other tobacco products. The proposed regulation proves that this initiative has had a major impact on the sculpting of the proposed regulations, and the potential for premium cigars to be treated appropriately, as fundamentally different than other tobacco products. The FDA's structure of the proposed rule makes clear that but for these efforts, premium cigars would have been treated the same as cigarettes. Based upon this extensive work, the door still remains open for exemption of premium cigars from misplaced and destructive forms of regulation.

However, the next steps in the process will determine the very future of the industry. The message as to why premium cigars should be exempt from such regulations must be the strategy for every consumer, retail tobacconist and manufacturer of premium cigars, over the course of the next 75 days, ending July 9, 2014.

The most onerous of proposed rules include: the potential for millions of dollars in new 'user fees' imposed on the industry; corporate registration with the FDA; labeling requirements for manufacturers; submission of ingredients and testing requirements; bans on samples for consumers; pre-market federal review before issuing new cigars; in addition to a new attempt to define a premium cigar with a $10 price point. It is CRA's opinion, as well as the consensus of regulatory lawyers and commentary broadly, that this is just the beginning. There are forces promoting additional regulatory mandates that will lead to advertising and marketing restrictions, manufacturing practice regulations, as well as bans on self-service sales at local community tobacconists.

In a statement by CRA Executive Director J. Glynn Loope, CRA intends to vigorously oppose those proposed regulations that could forever change the culture of the premium cigar industry. He stated, "The potential for regulations such as those being proposed by the FDA would forever alter the premium cigar experience as we know it. From the ability of manufacturers to exercise their creativity in the creation of new cigars, to how cigars are promoted and marketed, to how consumers shop and enjoy their cigars, are each under assault with this deeming regulation. CRA will be developing simple means for consumers and all involved with this art form of premium cigars to communicate their concerns to the FDA".

There was, though, a telling commentary with the FDA narrative - that the message got through that premium cigars are different from other product categories. It proved the virtue of the federal legislative effort, through H.R. 792 and S. 772 pending in the 113th Congress, that now carries 154 bi-partisan members of the U.S. House of Representatives and 15 bi-partisan members of the U.S. Senate as co-sponsors. Various passages of the Deeming Regulation, validate the influence this advocacy effort had on this phase of the regulatory process.

CRA and other industry allies will not halt the legislative effort to seek a mandated exemption from the proposed regulations, and will continue efforts to work with the FDA and Administration for acceptable outcomes for America's cigar enthusiasts.

Also, CRA is leading an international coalition to communicate the trade implications of regulation, which the Administration has acknowledged as a factor. Working with the embassies of the Latin American cigar producing nations, CRA will be communicating to stress the political and economic consequences of federal regulation on that region, as well as on those nations providing premium cigar tobacco.

Once again, the importance of the next 75 days cannot be overstated. Upon completion of the final rule, the 'horse will have left the barn.' In the coming days, CRA will be providing updated information of means for concerned individuals to participate in the FDA's Public Comment Period.